21st Birthday celebration at Digby and Sowton Station
26th May, 2016 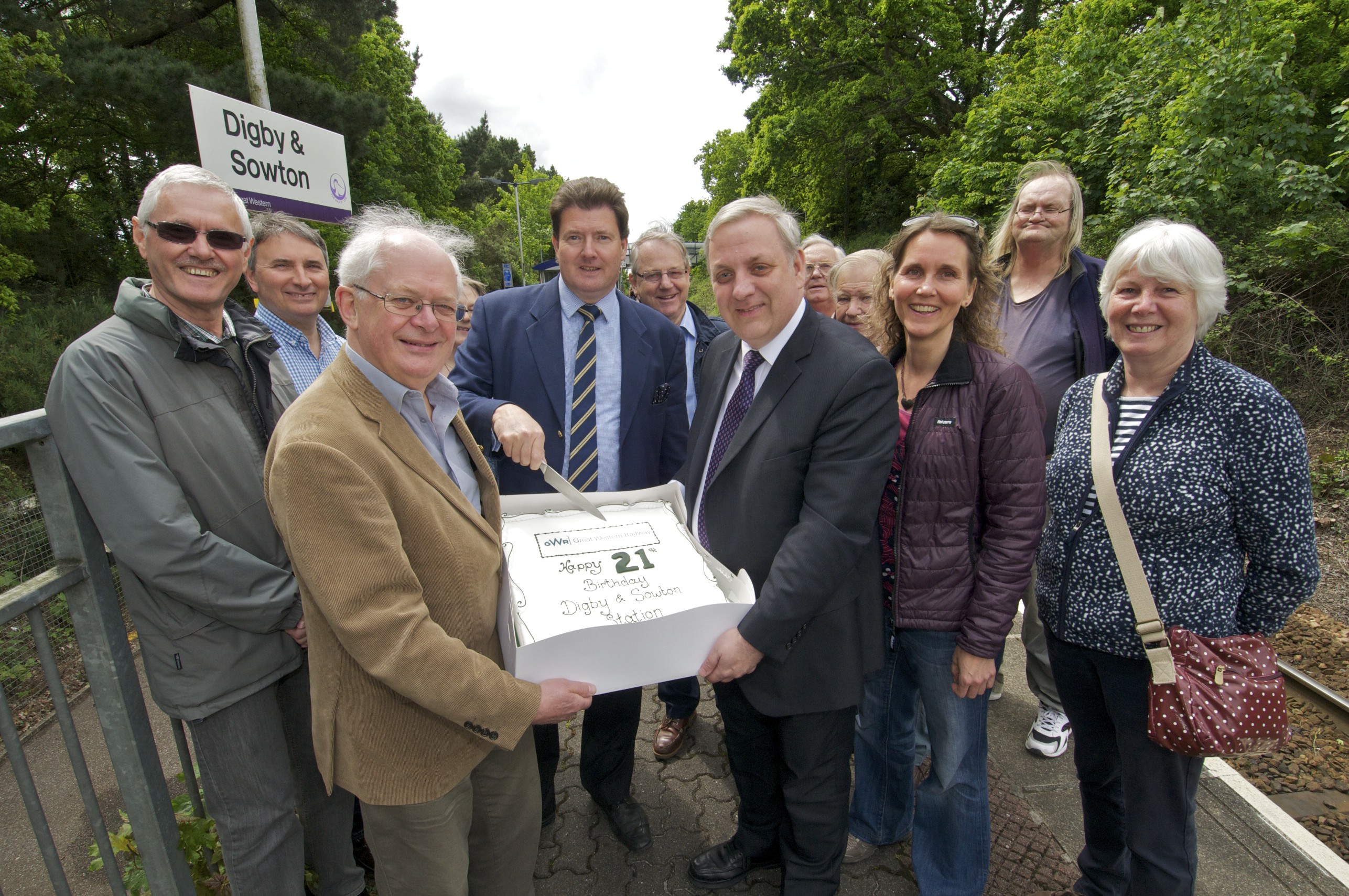 Digby & Sowton station’s 21st birthday on Monday 23 May was celebrated in style with a giant birthday cake cut by Cllr Andrew Leadbetter, Devon County Council Cabinet Member for Economy and Transport in an event at the station, which is on the Exeter – Exmouth “Avocet Line”.

Present to help with the celebrations (and eat the cake) were members of the Avocet Line Rail Users’ Group, including Vice Chair Noel Harrison, Anette Grahns of the Digby Community Association and Richard Burningham, Manager of the Devon & Cornwall Rail Partnership.

The station is popular with local residents and commuters to businesses on the Sowton Industrial Estate and on Exeter Chiefs’ match days, is thronged with rugby fans going to nearby Sandy Park.

Digby & Sowton station was a Devon County Council led project, largely funded by the Council.  Passenger numbers have increased steadily since the station opened and it is now the eleventh best used station in Devon and Cornwall with an estimated 571,510 passengers in the 2014/2015 financial year.

Until Newcourt station opened just down the line last year, Digby & Sowton was the most recent station to open in Devon.

“I’m delighted to have been invited to this wonderful anniversary. Thanks to all those involved in promoting and improving the Avocet Line, which is going from strength to strength.  I’m very proud to have this station in my ward.”

“Digby & Sowton station has been a huge success ever since it opened in 1995. The County Council have long worked to enhance, develop and promote Devon’s rail network.  Digby & Sowton, Newcourt and Cranbrook stations are key examples of this with Marsh Barton in Exeter due to be next.”

“Our local Community Rail services are not only among the fastest growing, but also among the most reliable in the country; that is why from Sunday May 15 we introduced even more services on the line – to run every half an hour through most of the day.

“Digby and Sowton is a key station on the route and we are pleased to see it continue to support the community and the local economy that it serves.”

Sunday day trips have been made easier since 15 May as trains now run every half hour through most of the day on Sundays throughout the year, instead of the previous hourly service. All trains stop at Digby and Sowton.

Ideas for what to do on a Sunday day trip by train can be found at a new website www.SeizeTheSunday.org

For information about train times contact National Rail Enquiries on 03457 48 49 50 or visit www.gwr.com.