‘Bee Alston’ station a hive of activity for a day 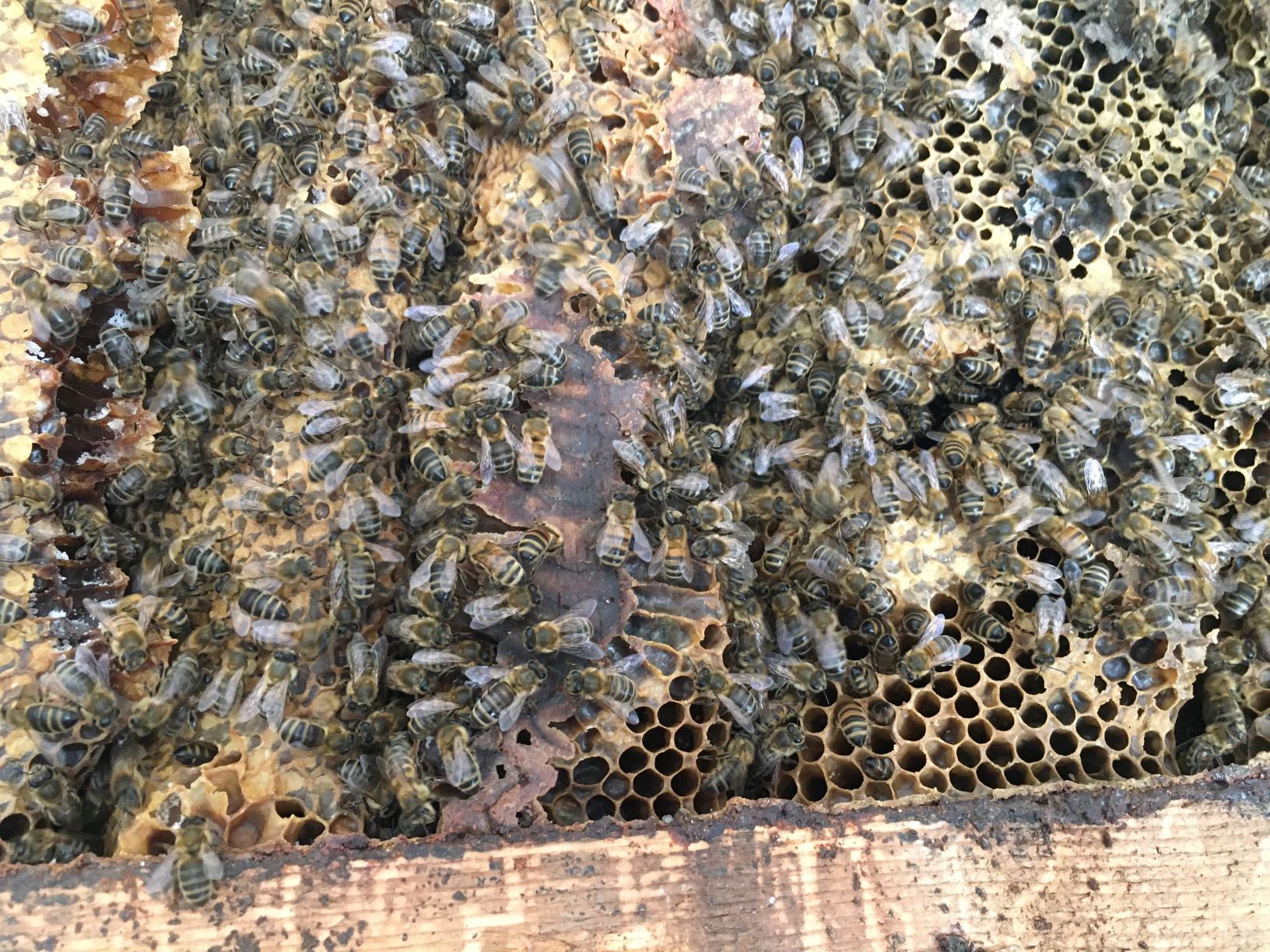 A day in the life of a community rail officer is never dull but for Rebecca Catterall of the Devon and Cornwall Rail Partnership, donning a bee keeping suit in the line of duty was one she never dreamed would happen.

The Partnership has been working with Bere Alston Scouts for a couple of years to assist them in improving the planters on the disused platform at the station.

The platform has an old waiting room and signal box (pictured below) from the time when the line extended to Tavistock, Okehampton and Exeter, part of the “Withered Arm”, the London and South Western Railway’s mainline to London Waterloo. 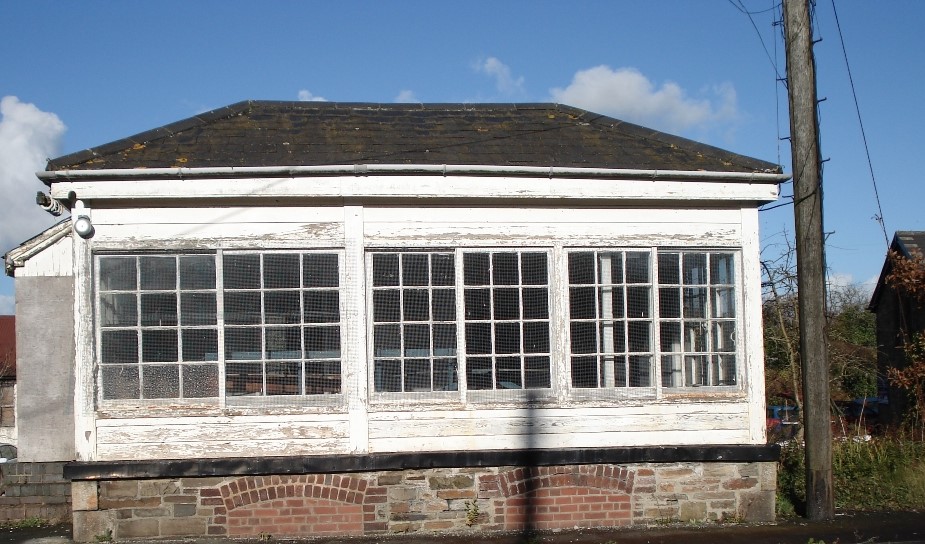 The signal box has stood unused for many years but with the Scouts needing somewhere to store their tools and use as a potting shed, the idea of bringing the signal box back to life took hold.

Unfortunately, there was one rather large problem standing in the way of progressing any work to the building; a colony of approximately 60,000 honeybees. 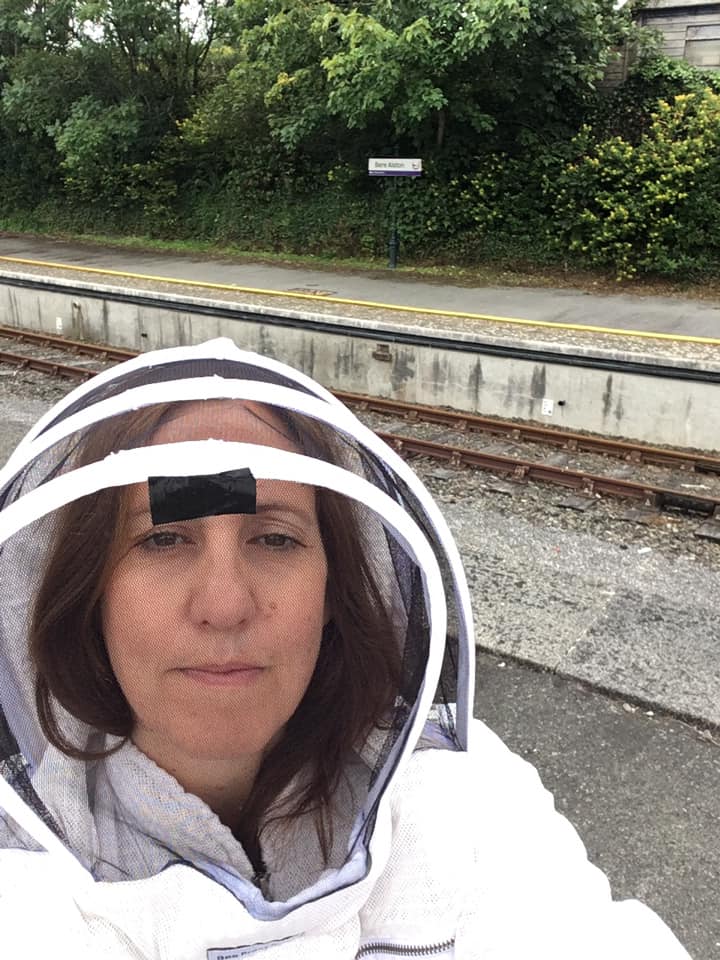 Rebecca said: “The whole of Bere Alston station is in a Conservation Area and we have always been keen to make sure that the old signal box was kept in a condition where it could be used by a community group.

“We painted it back in 2008 with a group of student volunteers from Plymouth University and there were a few bees around then, but not that many. Based on the number of years they had potentially been in the building; I contacted a local bee keeper and he said that there could be around 60,000 bees in there and it would be a pretty big job to get them out.”

Removing the bees had to be done at just the right time of year so that the colony would survive relatively unscathed.

Remove them too late in the year and they would die of cold, remove them around the swarming season of May/June and the colony would be at its peak.

16th July was chosen as the date and Rebecca met local beekeeper Dale Wood early at the station to begin what would be almost 8 hours of work.

Immediately Dale could see the bees had made their home between the internal and external panels of the signal box.

The only way to get them out was remove each panel and then use Dale’s homemade ‘bee vac’, a low suction hoover which would transport the bees directly into a box so that they could be safely stored while the work was happening. 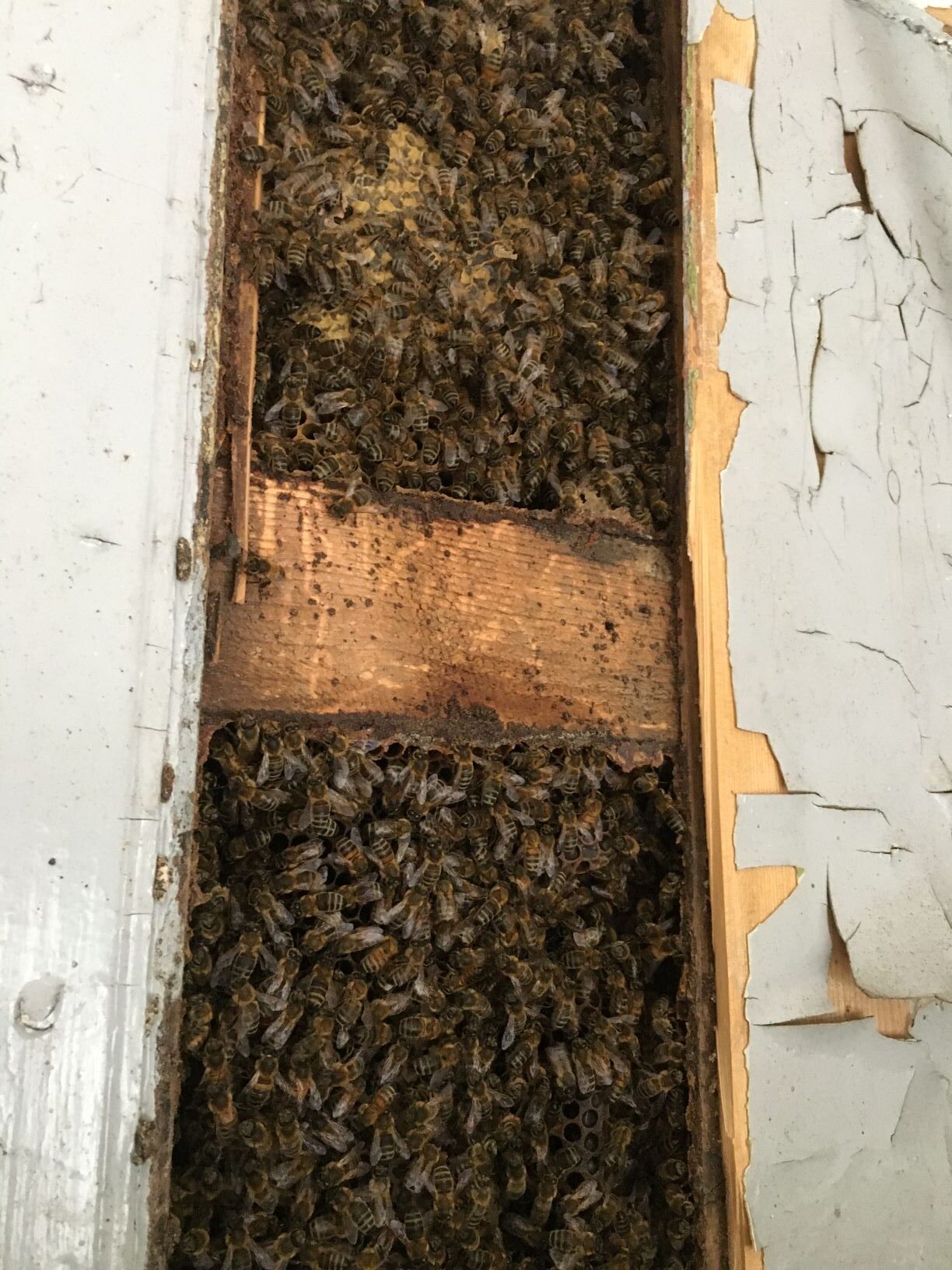 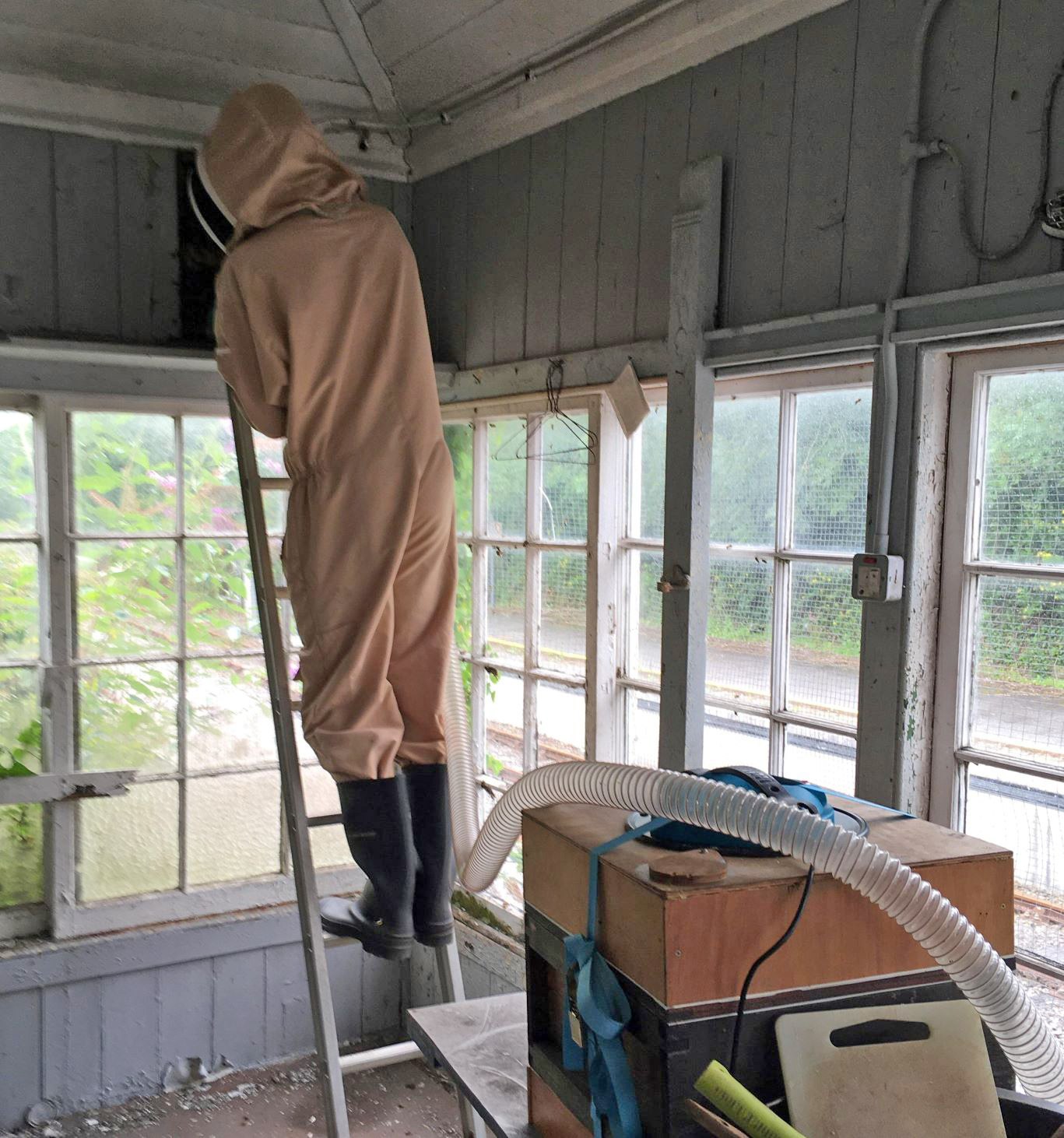 Rebecca said “The low hum of the bees as Dale started removing panels was initially quite therapeutic but as they got more and more agitated they started getting a bit aggressive, so staying in the bee suit Dale had provided for me was by far the safest option and the only way to get some incredible photos of the process”

One by one, the panels were removed and behind each panel thousands of bees could be found. 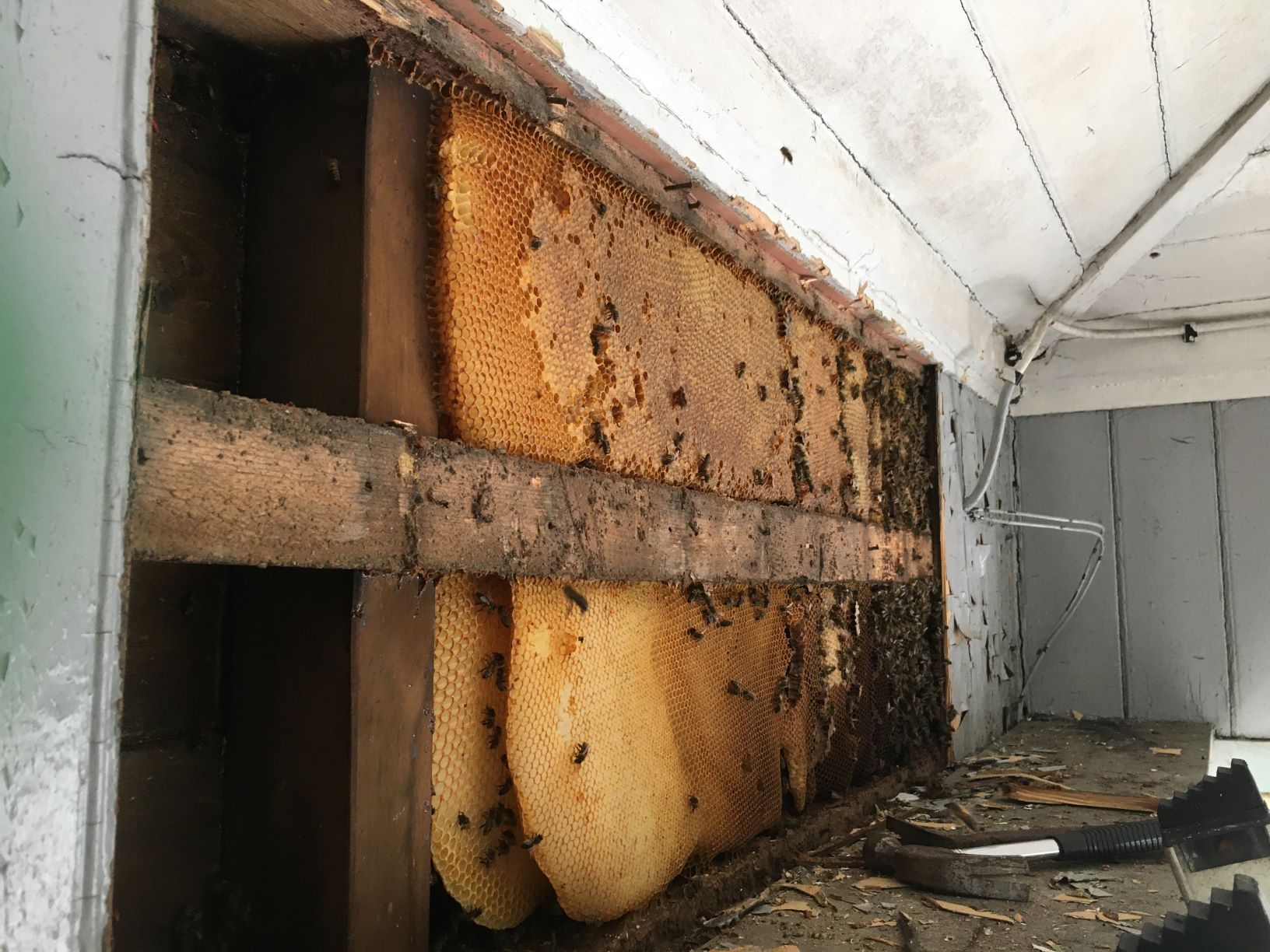 In amongst all these bees though, the Queen had to be found to enable the colony to carry on.

By midday, after already working for 4 hours in what was becoming an increasingly warm day, the Queen was found, much to Dale’s relief.

Three hours later most of the bees had been safely removed and 5 buckets full of honeycomb cut out. 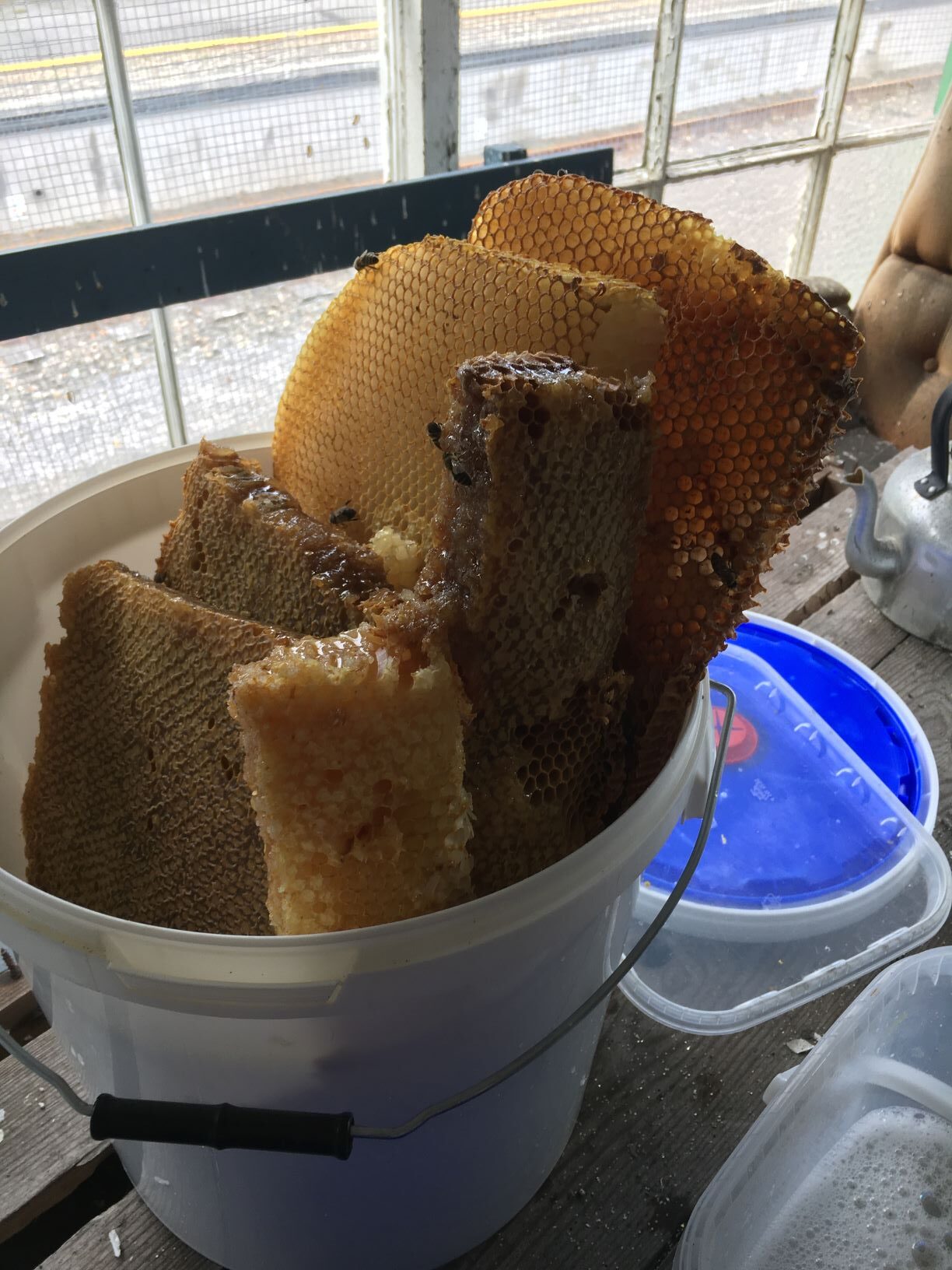 Dale said, “A large colony that has been here for such a long period of time, when others have been decimated by disease, could actually be very important for the species.”

Bee passports at the ready, the bees travelled with Dale back to his hives in Cornwall, where, with the Queen, they will be able to establish a new colony there.

For Bere Alston signal box it means that the Partnership can now start the process of getting the building restored and brought back into use for community benefit.

A bit of railway history

The line through Bere Alston and Bere Alston station itself opened on 2 June 1890.  It was part of the London & South Western Railway’s attempt to establish themselves as the principal railway between London and Plymouth, especially for the important trans-Atlantic Ocean Liner passenger and mail traffic.

The 1960s saw massive change at Bere Alston and indeed the famous Beeching Report of 1963 called for the complete closure of the railway through Bere Alston and the Callington branch line.

After much local protest, it became clear to the railway authorities that the train service to Bere Ferrers, Bere Alston, Calstock and Gunnislake, which was very well used for a rural area and still is today, could not be adequately replaced by buses because of poor road links.

This meant that today’s Tamar Valley Line was reprieved, but the Callington branch line was closed beyond Gunnislake in 1966 and the former main line north of Bere Alston to Tavistock and beyond was closed in 1968.   The goods yard also closed in 1968.

The signal box closed in 1970 when the surviving railway was reduced to the single track and simple train crew operated junction there today.  In most cases, that would have seen the signal box demolished shortly after but instead all the signalling levers and other equipment was removed and it became the base for the local track maintenance gang.

This use ended by the early 1990s and the building has been disused ever since but, all being well,  it won’t be for too much longer.

Devon County Council is also pursuing a “Restoring Your Railway” scheme to rebuild and reopen the 5 ½ miles to Tavistock.